In September we loaded up the van to check off a bucket-list item: North Rim of the Grand Canyon

We, like most people who visit the Grand Canyon, had only been to the more popular South Rim. We actually stayed there for 2 weeks! Why is it more popular? Well, for starters, it’s open year-round, easier to get to, has more lodging and food options and more nearby things to do, and is **very** dog friendly for a national park.  The South Rim is amazing, but we wanted to see what only 10% of visitors end up seeing — the “other side.”

Now that we live in New Mexico, the North Rim became more accessible to us, so we squeezed in a trip before it closed for the season. As usual with national parks, shoulder seasons are the best time to go.

The North Rim is more remote than the South Rim. If you’re standing on the South Rim side, the North Rim is roughly only 20 miles away.  However, your options to get there aren’t so easy: a 5-hour drive or a 2-3 day rim-to-rim hike.  Even driving from other directions, the national park is deep inside the Kaibab National Forest, and takes longer to get to.

The nearest towns to the North Rim with full-service grocery stores are Page, Arizona, and Kanab, Utah. Make sure you have enough of your dog’s preferred food before heading to the park!

As already noted, the South Rim is more dog-friendly than the North Rim.  Here’s what you’re missing taking your dog to the North Rim as opposed to South:

• No boarding facilities — Unlike the South Rim, North doesn’t have a kennel, which means there’s no place within the park to board your dog while you hike into the canyon.

• Not many dog-friendly trails.  At the South Rim, many walking paths are paved and thus allow dogs.  At the North Rim, they are only allowed on the bridle trail (greenway) that goes past the campground, and the portion of the Arizona Trail north to the park entrance station.  It’s a nice long walk or run, but more wooded than scenic.

• Not many places to sit and hang out.  This one caught us off guard!  There just isn’t much outdoor seating around the North Rim Lodge.  We got food to go since we had the dogs with us.  We walked around for a while looking for a spot to settle down, but all the available picnic tables, benches, and chairs were occupied — and this was off-season!  We ended up bringing the food back to the van and eating inside.

Here’s what we did with our 1 day at the North Rim, with 3 dogs:

• Left our boondocking location and drove some 45 minutes to the Rim, almost half of that on the bumpy forest road.  Going deep into the national forest gets you to the better sites!  The canyon itself will be far in the distance, but you can find sites on the edge of a cliff looking in the right direction, and along the edge, you can get some cell signal too.

•  Picked up some snacks and drinks at the food truck at the North Rim Country Store (6 miles outside of the park entrance).

•  Braked for some traffic on State Route 67!

•  Arrived at the park and stopped by the visitor center for a photo op and to pick up maps/postcards. Don’t forget to ask about the B.A.R.K. Ranger program! 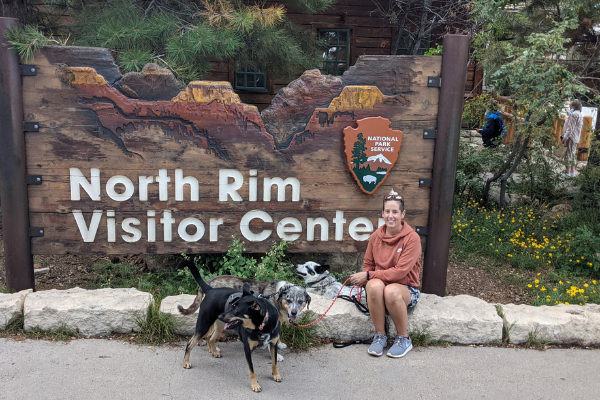 •  Walked to the lodge and took photos at the rim.

•  Took turns holding dogs while the other person hiked out to Bright Angel Point. Allow 30 minutes per person.

•  Took turns holding dogs while the other person checked out the inside of the lodge.  Make sure you visit Brighty!

• Hiked the bridle path from the lodge to the campground. Got a snack at the General Store before heading back. The walk to the campground is roughly 2 miles round trip and has some incline to it and no water along the way, so be prepared when you head out.  The trail continues past the campground if you want a longer walk and connects with the Arizona Trail.

•  A quick, to-go lunch from Deli in the Pines.  (The Grand Canyon Lodge also does take-out).

•  Scenic drive to Point Imperial and Cape Royal (warning, vehicles over 30 feet are not allowed).  Be warned that dogs aren’t allowed at all the viewpoints.  For example, dogs are not allowed on the Cape Royal Trail.  We took turns walking out to Angels Window.  We would have liked to walk to Cape Royal also, but, having to take turns, it would have been too time-consuming and lonely: the walk is 1 hour round trip from the parking lot.

If you’ve never been to the Grand Canyon before and are traveling with your dog, we definitely recommend the South Rim over the North.  If you’ve been to the South already, North is definitely worth a stop, and in general less busy.  Just make sure to adjust your expectations so that you’re not disappointed you won’t be able to see/do everything with your dog along for the adventure.  Things to consider:

•  Will I be traveling with someone?  Can we take turns doing the trails/buildings that aren’t dog friendly?

•  If my dogs are used to hanging out in my RV while I explore, will the weather be cool enough during my visit?

•  If I plan to stay at the park, can I get reservations at the North Rim Campground? (There are no walk-up sites available)

Have you visited the North Rim with your dog?  We’d love to hear about your experience below in the comments!

If you’re reading this, you’re likely an animal lover, so we want to mention that just 90 miles from the park in Kanab, Utah is Best Friends Animal Sanctuary.  If you’re this close, make sure you stop by!  They give free tours, offer a $5 all-you-can-eat vegan lunch, and if you plan ahead, you can volunteer with the animals.  Absolutely worth the stop! Oh, and they have 6 RV sites you can reserve!