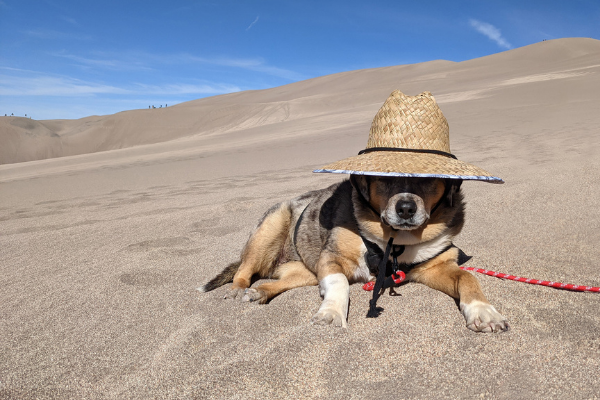 The sand dunes formed from sediment washed into large lakes from the surrounding mountains. After the lakes dried, the exposed sand was moved by predominant winds into one corner of the valley, but the wind did not have the strength to lift it over the mountains. Storm winds blowing in the opposite direction cause the iconic dune shapes to form.  The park contains the tallest sand dunes in North America!

In spring and into early summer, snowmelt from the mountains flows as a shallow creek through the flat sand between the dunes and the mountains. 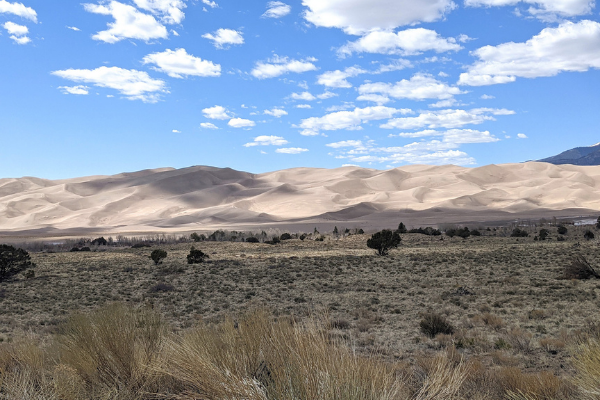 We were originally planning to visit in the fall of 2020, we post postponed our trip because of the pandemic.  It ended up working out in our favor, because, instead, we visited in early May of this year — and we think it was the best time of year to visit (we’ll explain why in a bit!)

The drive from our home in New Mexico was about 4 hours, which made for an easy weekend trip.  We did have a bit of traffic just before the park though…

Luckily, with the help of a cowboy, the traffic cleared up and we continued our drive. As you approach the park, the dunes become more visible.

We decided that since it was already mid-day and too hot to be hiking the dunes with the dogs (Yes! You can take your pup on the dunes!), we’d only check out the visitors center on the first day. The dogs were so excited to get out of the van and explore.  The first thing we did was walk the trail directly behind the visitor center.

Due to COVID precautions, the visitor center was only allowing a handful of people in at a time.  Tommi and I took turns waiting in line and going in, while the other one held the dogs outside.  We learned all about the park’s BARK ranger program and where dogs are allowed within the park so we’d be prepared for the next day.

There is camping within the park, but we usually prefer to boondock on public lands, because it gives us more space to explore with the dogs.  We drove about 20 minutes to dispersed camping at Lake Como Road (also known as Sacred White Shell Mountain though the nearby mountain is named Blanca Peak).

We woke up early the next day to arrive at the dunes as early as possible since it was a Saturday and the park would likely be busy.

Dogs are allowed to hike High Dune, and not the further-out ones, so that was the plan. We made our way to the dunes parking area and were there by about 7:40 a.m.  The lot was empty, and we had our choice of parking spots.  We geared up and headed out by 8:00 a.m.  In retrospect, it would have been better to get an even earlier start to complete the uphill hiking before it became too hot.

What did we pack to hike the dunes?

I mentioned that early May was a great time to visit.  The reason for this is that the seasonal creek at the base of the dunes, Medano Creek, usually runs from mid-April to July. By August, it’s dry.  Late May is said to be the peak of flow, and the park becomes very busy, as it’s a popular spot for parents to bring their kids to play and tube in the creek.  The NPS website has a great breakdown of what to expect by month. The weather in early May was also fairly pleasant, and not horribly hot.

Back to the hike!  If you visit when the creek is running, you’ll need to cross it to access the dunes from the parking lot.  Don’t even try to keep your shoes dry, just walk right through it.

Protip. Try to get your dogs to do all their business on the parking lot side of the creek so you can be close to trash cans.  Once you cross the creek, you’re carrying poop bags for the remainder of your hike! (We know this from personal experience… thanks, Lily and Mushy!)

There’s no established trail to follow to get to High Dune, so you just set off and find your own way.

It’s easiest to walk on the ridges of the dunes, and you’ll see lots of footsteps of previous visitors.

The park website says the average hiking time for High Dune is 2 hours for the 2.5-mile trek.  Let me tell you…it’s not easy! We are in decent shape and do a fair amount of hiking, but hiking in sand is a whole other experience! We took a lot of breaks, both for us and for the dogs. We also touched the sand with our hands regularly to make sure it wasn’t becoming too hot. At times, the dogs would lie down on their own.  Delta in particular didn’t seem to like the feeling of the sand between his toes and would lie down often.

During breaks we drank water and ate snacks. Sandboarding is a popular activity here so we watched a group of people board down a very steep dune (some more successfully than others!).

We made it about halfway to High Dune and decided that because the sun was glaring down and warming the air up quickly, it was probably in the best interest of the dogs to turn back.  I think if we had gotten an earlier start, we could have made it to the top.

Going down was a lot easier, and more fun!  At one point we ventured off the ridge and ran down the side of a dune and the sand was knee-high!
It was so nice and refreshing to end our hike in Medano Creek.  The dogs seemed to love having their paws in the cold water and enjoyed some stick fetching and zoomies. 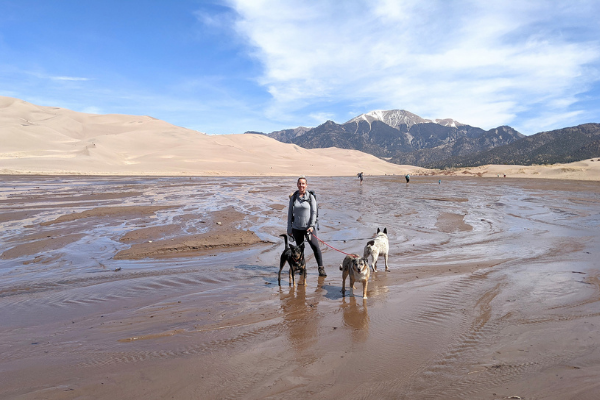 We ate the remainder of our snacks while sitting on the bank of the creek, and then headed back to the van shortly after 10:00 a.m.  Boy, had the parking lot filled up!  It was completely packed, and people had started parking on the side of the road leading to the lot.
We got back in the van and headed over to the parking lot for Mosca Pass Trail, which to our surprise was super empty! (The main draw of the park is definitely the dunes and the creek.)
We rested for about an hour before starting our afternoon hike.
We chose Mosca Pass Trail because it offered some relief from the sun, in sections. Like the dunes, you’re essentially hiking uphill the entire way.  It takes 3.5 miles to reach the pass.  We had heard the pass wasn’t that scenic, and the endpoint of the hike is just another parking lot, so our goal was to hike up high enough to see the dunes and then turn around.
At about 1.5 miles in, we caught a glimpse of the dunes and called it a day.
For those of you wondering, we’re happy to report that Delta did become a BARK ranger like Lily and Mushy. He followed the BARK ranger rules perfectly and earned his certificate from the visitor center which we framed when we got home, and it’s now proudly displayed above his crate.
Have you been to Great Sand Dunes National Park?  Share your experience below!