We are full-time RVers and travel the United States of America, seeing places we have not seen before, combined with volunteering at national and state parks, wildlife refuges, and national fish hatcheries.

This year we were blessed to be able to visit the South and North Dakota Badlands, while helping at the Garrison Dam National Fish Hatchery in Riverdale, North Dakota, for the summer.

We have seen many pictures of the Badlands, but to experience them with our own eyes was overwhelming to say the least. I hope our diary will give you an idea of this stunning Land of Stone and Light. 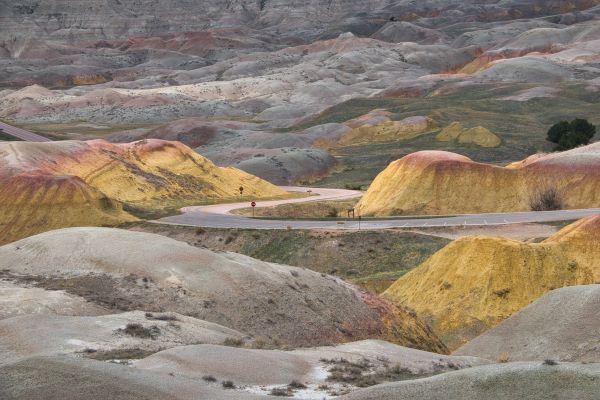 Less than 10 miles after exiting busy Interstate 90, we were welcomed by a friendly ranger at the Northeast Entrance of Badlands National Park. This gate was the door to a different and fascinating world. It is hard to describe it with words and impossible to capture the raw beauty with the camera. 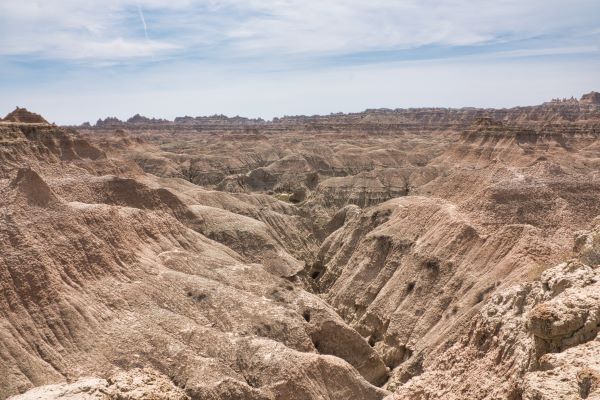 Frank Lloyd Wright, the famous architect, described it this way: “What I saw gave me an indescribable sense of mysterious otherwhere.  … As we rode, or seemed to be floating upon a splendid winding road that seemed to understand it all and just where to go, we rose and fell between delicate parallels of rose and cream and sublime shapes, chalk white, fretted against a blue sky with high floating clouds; the sky itself seemed only there to cleanse and light the vast harmonious building scheme.”

A steep decline brought us down to the Ben Reifel Visitor Center and the Cedar Pass Campground. 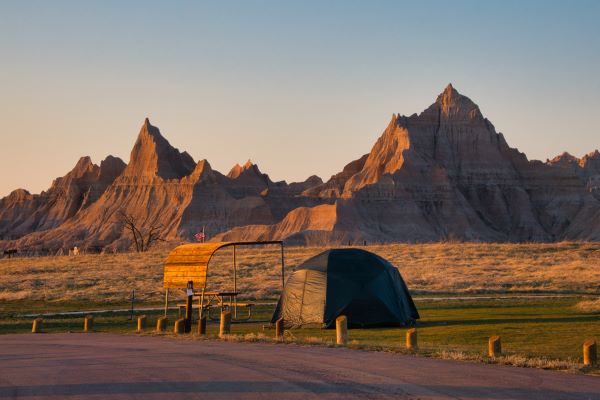 The campground was recently in the spotlight when some of the footage for the highly acclaimed Nomadland movie was shot here. The reserved site was large enough for our 36-foot motorhome, and the campground became our home for the next five nights.

The next day we drove our towed car along the Badlands Loop Road. Every twist and turn of the road gave us the feeling of a curtain opening to a new scene of the beauty of mother nature. Frank Lloyd Wright portrayed it as “an endless supernatural world more spiritual than earth but created out of it.” 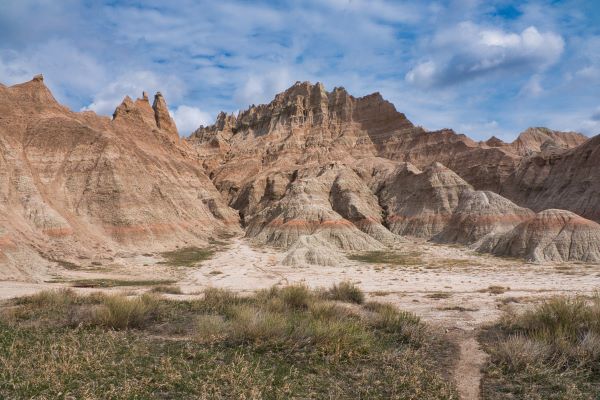 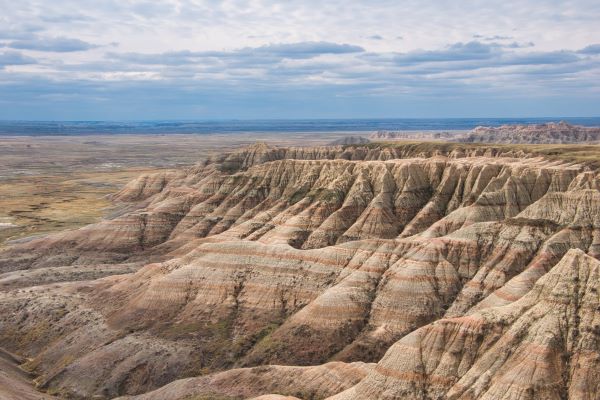 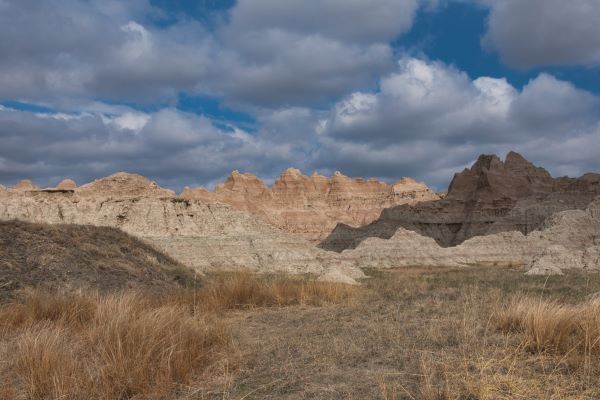 We devoted enough time to take it all in and to enjoy every “Kodak Moment” along the windy road.

After passing the Pinnacles Entrance, we headed north to visit Wall and the famous Wall Drug Store. What a contrast to the near absence of human noise in the Badlands.

We were thrown back into the 21st century world when we stopped at the Minuteman Missile National Historic Site Visitor Center. Another stop contrasting the vast peacefulness of Mako Sica (as the Badlands are called by the Lakota Indians), but worth the stop. 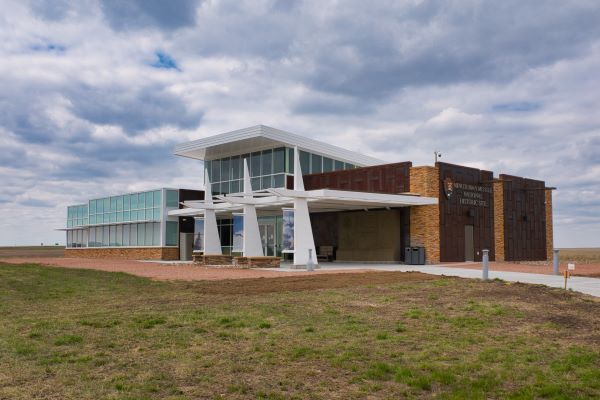 The Prairie Dog towns along Highway 240 are huge, and it is fun to watch these animals. Their gestures just put a smile back on our faces after the somber history lesson at the Minuteman Visitor Center. 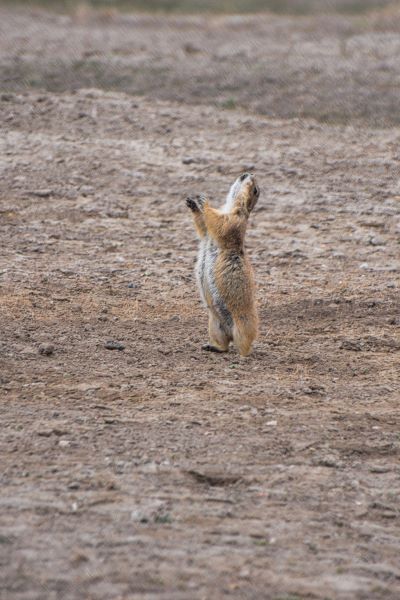 Experiencing the rugged fascination of the Badlands by foot added another dimension to our stay. Heading up (and down) the ladder of the Notch Trail was the pinnacle of our explorations. The hikes are all well marked, and the trailheads are mostly close to the overlook parking lots. A good water supply and charged batteries for the cameras were essential for us. 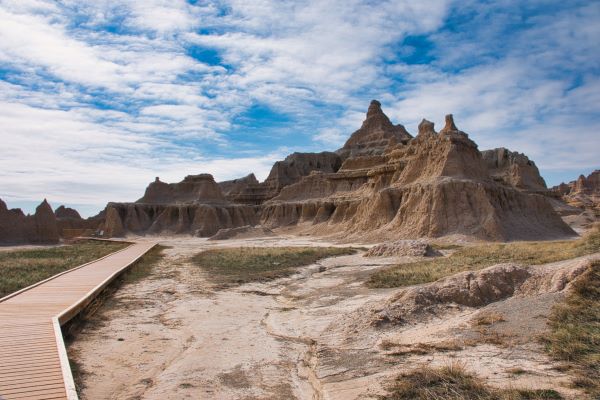 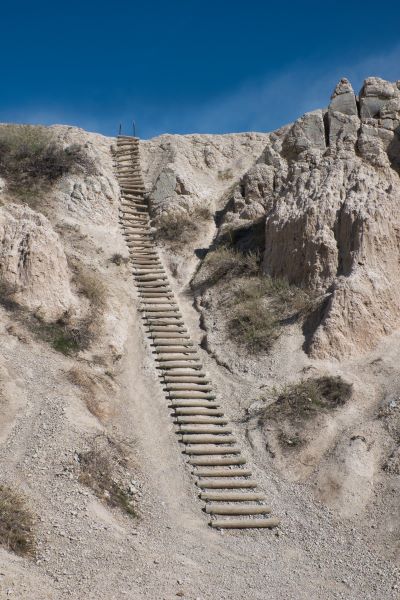 The Cedar Pass Campground was also a great place for day trips. Mount Rushmore, the Crazy Horse Memorial, and Custer State Park were within reach. 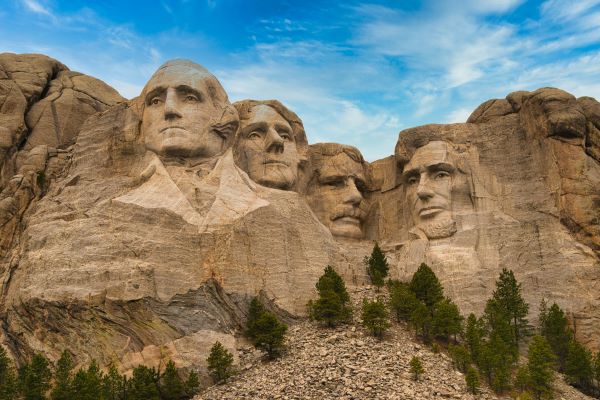 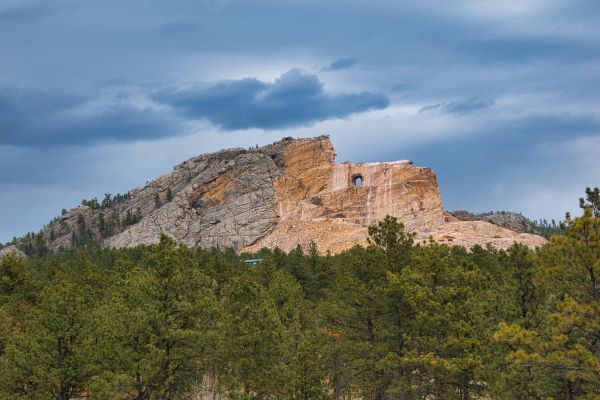 We also enjoyed our stop in the Black Hills, visiting the D.C. Booth Historic National Fish Hatchery at the quaint town of Spearfish, and going up the Spearfish Canyon Scenic Byway.

So many places to go, so many things to see… 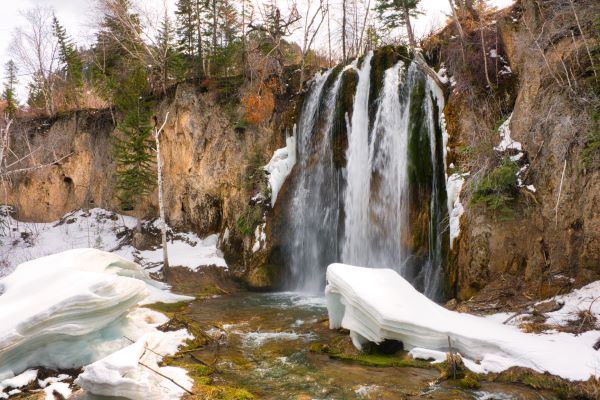 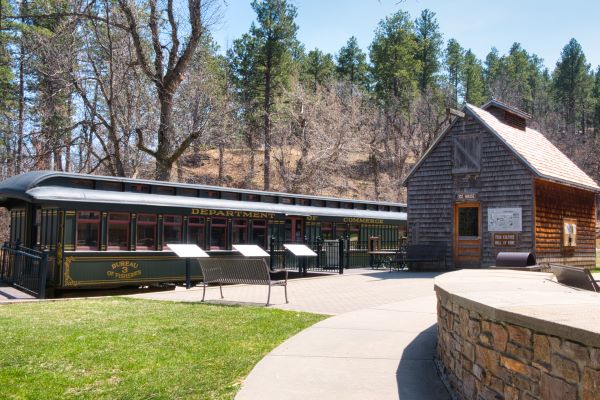 It was hard to say good-bye to the peaks, gullies, buttes, wide prairies, and thousand tints of colors that cannot be found in color charts; those subtle hues have left a lasting impression with us.

We took a break from the Dakota Badlands experience and started our volunteer gig at the fish hatchery. Since we always have free days in-between, we headed out to the North Dakota Badlands right around my birthday. Driving through the Killdeer Mountains gave us a first window into what to expect. The Killdeer Mountain Four Bears Scenic Byway is one of the 10 scenic byways in North Dakota and was as panoramic as we hoped. 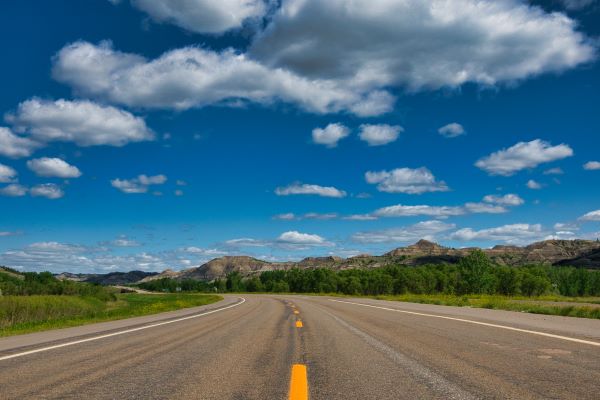 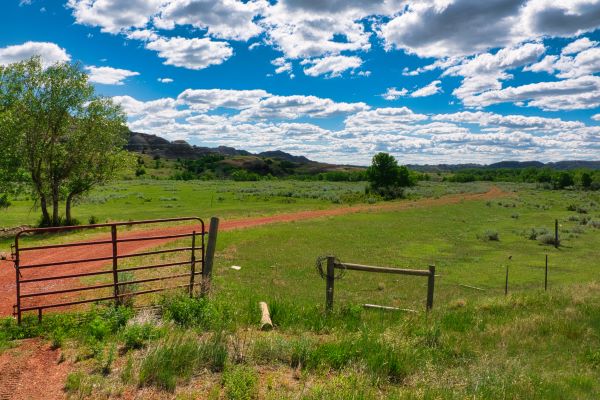 Watford City was a great stop for lunch prior to immersing ourselves into the North Unit of the Theodore Roosevelt National Park. Roosevelt called the North Dakota Badlands the romance of his life and wrote: “I grow very fond of this place, and it certainly has a desolate, grim beauty of its own, that has a curious fascination for me”. We fully have to agree, and you will, too, when you visit this place “beside the beaten roads of the present travel.” 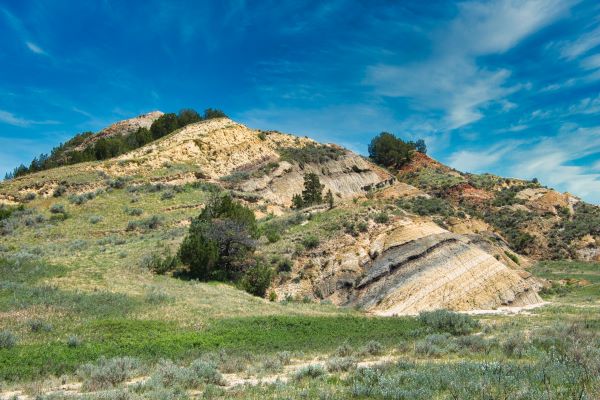 From the North Unit Visitor Center, we took the Scenic Drive, which is a 28-mile round trip. Other than the South Dakota Badlands, this park has many more green hues from vegetation. We stopped at the Cannonball Concretions Pullout and saw geology at work, with almost perfectly round rocks of all dimensions. Make sure to spend some time at the Oxbow Overlook, where the Little Missouri River takes a hard turn east. The river originally continued north to the Hudson Bay, but continental glaciers blocked its way during the most recent ice age. 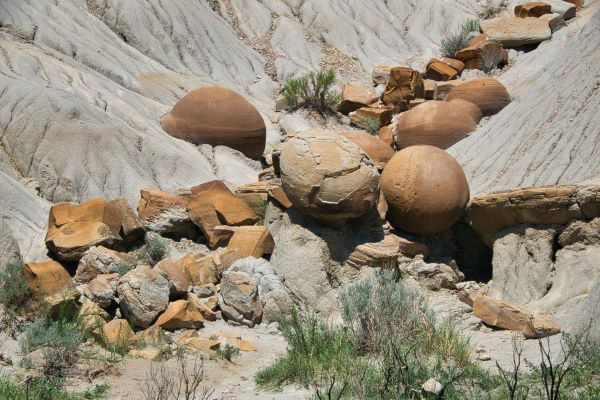 We headed down Highway 85 to check into our hotel in Medora. We took a stroll through the town, which was established by the Marquis des Mores, and named after his wife. Restaurants and stores are plentiful, and we were greeted by many nice and friendly locals. Next to the Marquis, Roosevelt is also front and center in Medora. 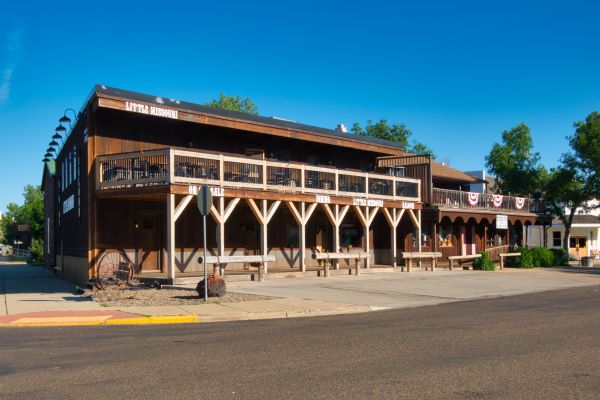 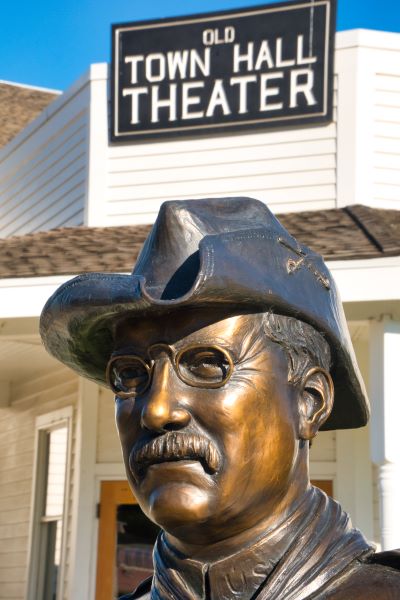 Before we passed through the gate of the South Unit of the Theodore Roosevelt National Park, we followed the signs to Chateau des Mores. The interpretive center is excellent, and walking through the Chateau, which the Marquis called a hunting lodge, threw us back into the late 19th century. The French born Marquis was destined to create the largest cattle empire on the banks of the Little Missouri River. This created a boom in Medora for three years, until all plans fell apart and Medora went back into a deep sleep. 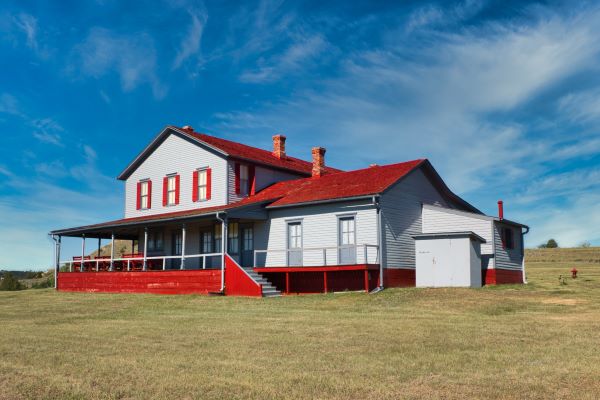 After this history lesson, we enjoyed the scenic loop drive through the South Unit. Wonderful vistas and short hikes made our day. 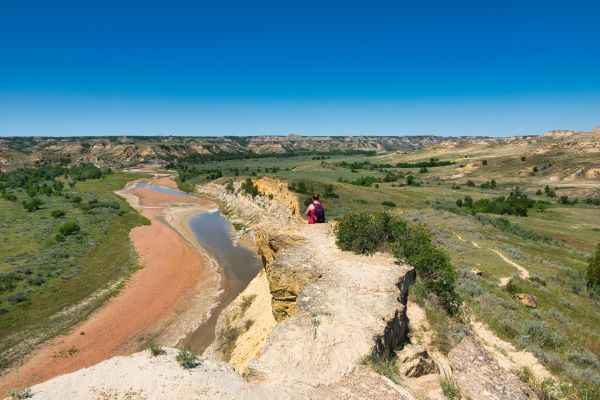 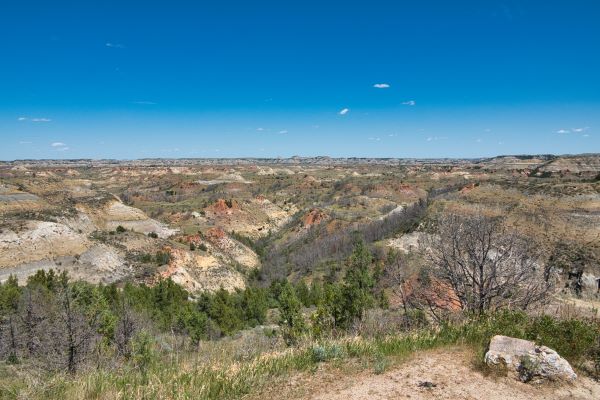 Prairie dogs, buffalos and our encounter with wild horses were the peaks of the day, and it was not over yet. 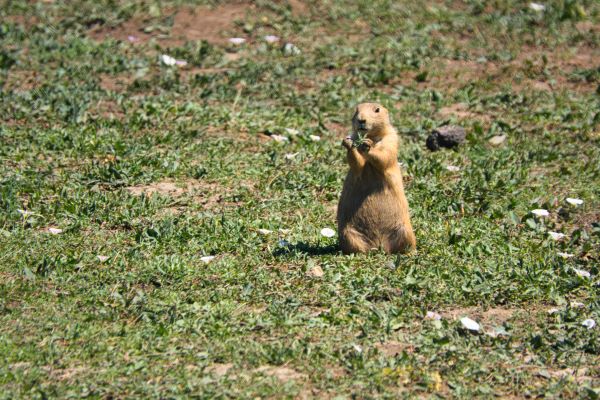 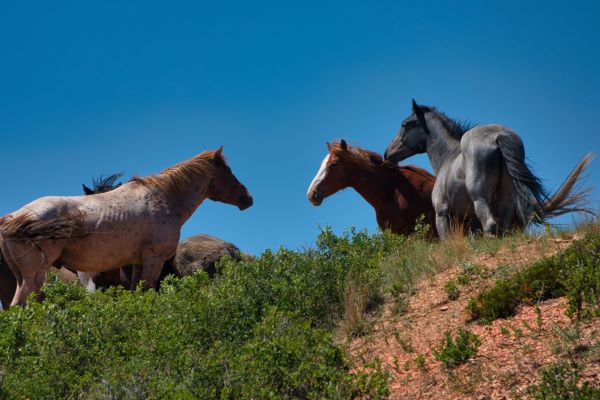 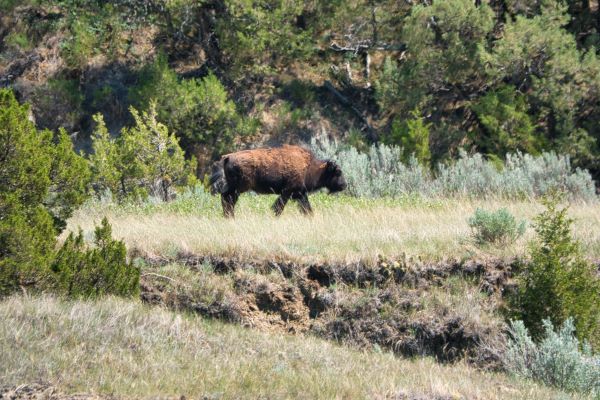 We had tickets for the Medora Musical. Harold Schafer, who founded the Gold Seal Company and brought life back into Medora is also featured in the show. We loved the professional entertainment, listening to patriotic music and country and western songs. The inclusion of the Badlands into the stage backdrop made it even more scenic and awe-inspiring. What a perfect birthday it was for me. 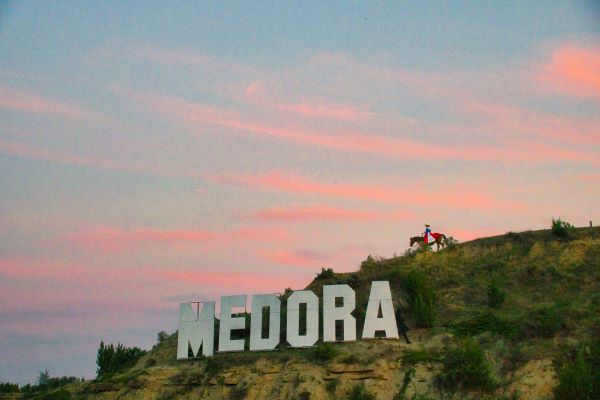 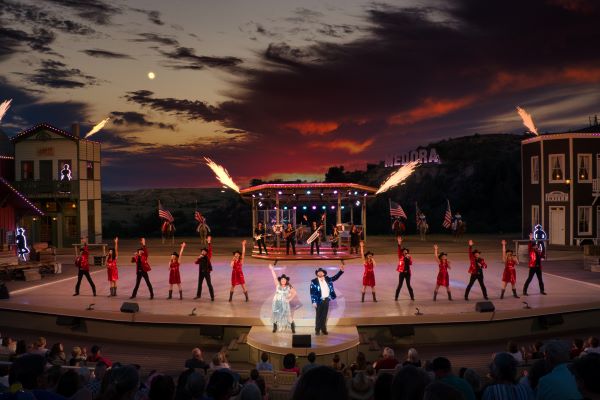 We went back home to the hatchery filled with so many memories and images of a land that Theodore Roosevelt called “a broken country (that) extends back from the river for many miles, and has been called always by Indians, French voyagers and American trappers alike, the Bad Lands.” 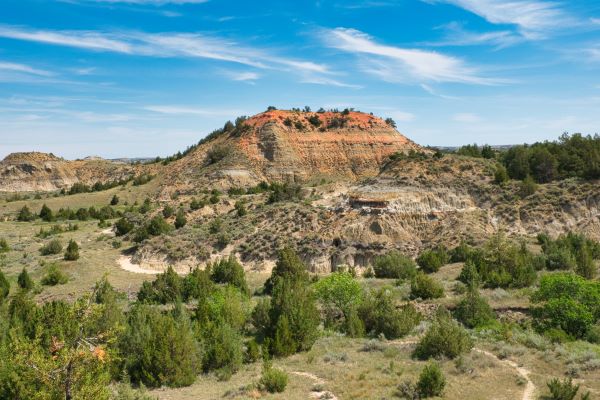