Anyone who travels in an RV with a pet crate knows how much valuable floor space they can occupy.  In this post we’ll cover how we “Ikea hacked” our dog kennel to make it a useful part of our living space.

Our dog Lily Goodgirl is named that for a reason.  She has free roam of the motorhome at all times.

Our other dog, Mushy, came to us crate trained when we adopted him in 2017. Since we didn’t know how he’d adjust to life with us, we felt it was best to make the crate a part of our living space so he would be safely contained when left unattended.  It was also useful to safely separate the dogs when they’re left at home. Overall, they are best buds, but we’ve had an instance or two of growling over bones and we’d rather be safe than sorry.

Also, Mushy loves the crate, and Lily enjoys lounging in it, too.  It’s one of the highly coveted nap spots in our Class A, and the dogs would definitely miss it if we took it away.

Mushy’s crate is 36″ x 21¾” — a standard size that you’ll find online or in pet supply stores. When we first set it up, we threw a blanket over it so that we could still throw some things on its top in a pinch (since it was close to our entryway), like sweatshirts and backpacks.

Pro-Tip: Mushy isn’t a chewer, but if your dog is, you would not want to put fabric on the crate as they might decide to eat it. 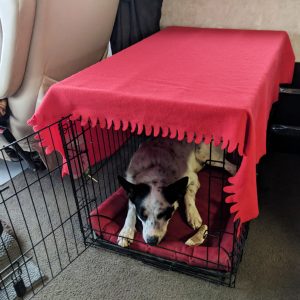 Overall, this was a fine quick-fix for us. But it was ugly and not a solid flat surface, and we knew we ultimately wanted something better.  Tommi started researching (#everyoneneedsatommi) and realized that Ikea sold a Linnmon table top (article number 002.513.38) that was 39⅜” x 23⅝”, the perfect size to rest on top of Mushy’s crate! And for a price of $13.99, there was very little to lose with experimenting in upgrading Mushy’s kennel.

How to DIY Your RV Pet Crate

We knew we wanted to be able to collapse the crate if needed, so we didn’t permanently attach the table top to the crate. Instead, it’s held in place with wide metal L-brackets. The L-brackets are attached with rubber gaskets to keep the table top quiet and in place. Plus, the brackets help prevent paint scratches. 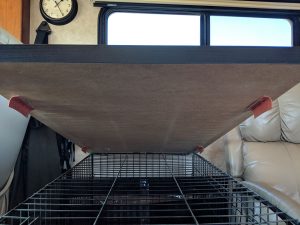 Pro-Tip: Stay safe with superglue — Tommi chooses to wear the same disposable nitrile gloves that he uses for dump station visits, rather than risk supergluing his fingers together.

Alternatively, you could also use wood trim pieces screwed under the table top to keep it from shifting. In that case, the wood is likely to be a bit more visible when installed, so you could stain it to match the table top.

Now Mushy’s crate looks so fancy, we’ve dubbed it his “office.” Granted, we have no idea what business he’s in or what he’s selling, but at least he has a nice space to do it in.

We upgraded Mushy’s crate with a Kong pad and a “hamster water bottle.” However, Mushy didn’t take to drinking from the hamster bottle, so we got him an easier to use clip on water cup, too. We call this the “office water cooler.” 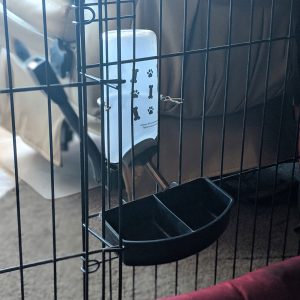 Do you travel with a pet crate? We’d love to hear what modifications you’ve done to make it suit your RV life! Let us know in the comments below.

Meet the Family
Ane and Tommi, F462447, love how RV life allows them to go on adventures with their rescue dogs. Full-timers since 2016, they share their experiences and review campsites through a pet-friendly lens on Instagram and TheDogisDriving.com.

5 Comments on Building an RV Pet Crate: How to “Ikea Hack” a Dog Kennel