Our dog Lily is a good girl, but when she sees critters that we’ve labeled “chippies” (chipmunks, ground squirrels, prairie dogs, etc.) she draws the line and crosses into… naughty dog territory. So keep reading for our Whistle 3 pet tracker GPS review…

Why a GPS Pet Tracker?

The longest we’ve lost Lily was for about 10 minutes in the woods while in Mammoth Lakes, California, as she darted off on a frenzied “chippy” chase.  It was awful.  Calling her name, Tommi traipsing through the woods while I stayed behind at the last spot where we saw her. Longest 10 minutes of our lives. Eventually, she returned — from the opposite direction we thought she went in — tongue sideways, happily panting and still on a “chippy high.” (Important note:  No chippies have ever been harmed by Lily. She’s a very slow potato and basically anything can outrun her.)

And Mushy — well, he loves us, but he’s not as much of a “Velcro Dog” as Lily is. Plus, his recall is worse. We usually only let him off leash for longer times in desert environments where we have visibility for miles, just in case he takes off running. He had been behaving better lately, so on a recent jog around a lake with Tommi, he was enjoying some off-leash stick fetching when he spotted a deer. Off into the woods he went. Tommi didn’t have his phone and was wearing his thin-soled running sneakers when he had to go on a 15-minute off-trail expedition hiking through cactus-riddled woods in search of Mushy. Needless to say, when they returned to the RV, Tommi was not a happy camper. “Let me tell you what **YOUR** dog just did…”

Both dogs are microchipped and always have identification on their collars, but I think those two “naughty dog” events pushed us to finally up our game and buy the dogs some kind of tracking device. Originally we were looking at the hunting dog style devices that don’t rely on a cell signal. Those are very expensive though, and you need to carry the receiver, so we decided to try out a GPS pet tracker first — the Whistle 3.

The Whistle 3 is a rectangular GPS pet tracker device that attaches to your dog’s collar and tracks its activity and location.  Because it uses the AT&T network, you can track your pet’s location “down the street or 3,000 miles away!” (Assuming the battery doesn’t run out.)

Mushy and Lily have had their Whistle’s for about a month now. Let’s take a look at the pros and cons… 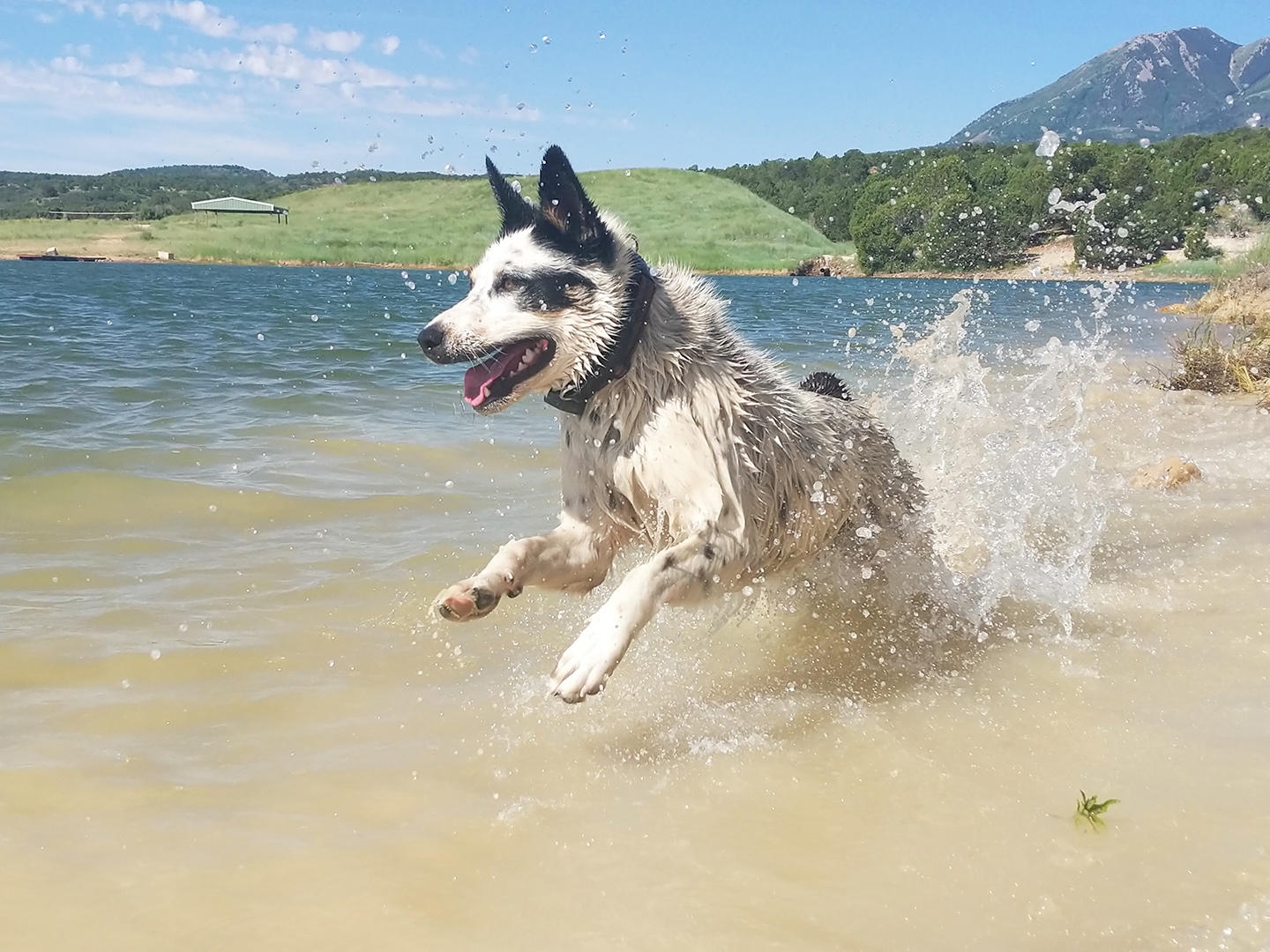 The Whistle 3 is rugged and waterproof. It is rated IPX7, meaning it can be immersed in up to 1 meter (3 feet) of water.  We love this feature because Mushy is essentially part fish.  He’s put his Whistle through the test by water wading and rolling in dirt, and Lily has put hers through an actual swim test. We’ve had no issues whatsoever. 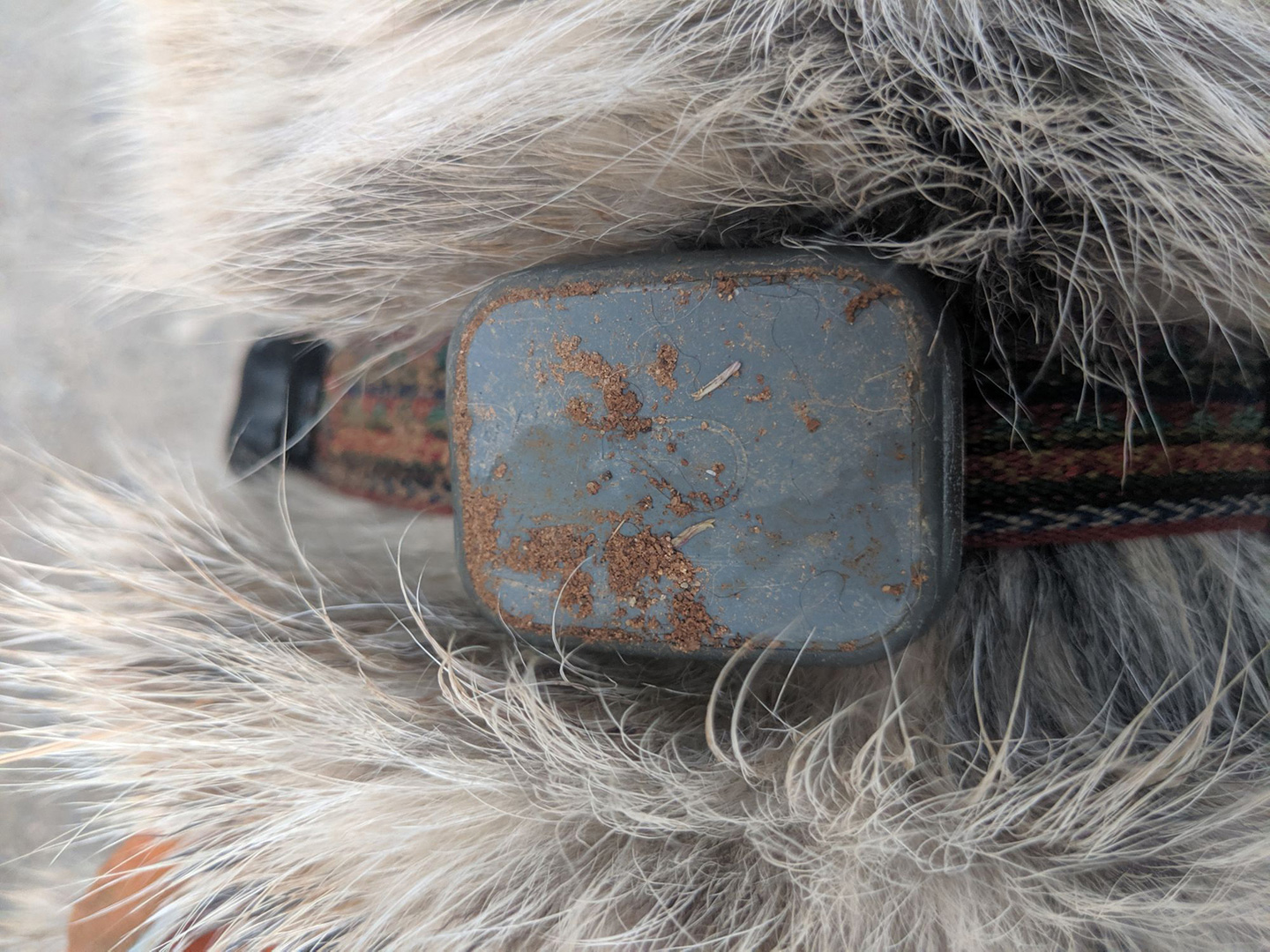 The app is fun and easy to use.  It has great notification capabilities which alert you to when your dog is on the move, who they are with, and what type of activity they’re doing.

These are examples of the phone notifications:

Longer term, it will tell you how much rest your dog gets, calorie burn, etc.  Since I do 75% of Mushy’s walking, I’ve ended up using the Whistle as MY personal activity tracker, too! I used to have a FitBit, but it broke and I find this to be more fun.  Currently, Mushy is on a 24-day activity streak and has traveled 96 miles in the past 27 days.

What We Don’t love:

Not Built for Active Travel

The Whistle service and app come with typical assumptions about stationary life. Each “safe place” is associated with one WiFi access point and vice versa. That’s great for when your dog is staying at your friend’s house for the day, but Whistle thinks all WiFi access points are stationary, and that’s just not true for RVers.

So the easiest way to work around this is to have just one “safe place” for all your camping. And when you arrive at a new campsite, access the mobile app, edit the safe place, and tap the “locate me” icon. The app will move the old safe place to your current location, and you can adjust the size & shape if needed before saving.

If you fail to update the location of the safe zone, Whistle will see your WiFi, assume it’s stationary, and show your dog on the map at the previous campsite.

The app will insist on you entering a recognizable address for the safe place, which will naturally never match your campsite. Apart from that being displayed in the app, what you enter doesn’t seem to matter — but it does have to be a valid address.

The more active your dog, the quicker the battery runs out.  The Whistle “naps” when it’s within range of your WiFi, so more walks means more battery used.  The Whistle website says the battery can last up to seven days before needing a charge, but Lily’s Whistle is averaging 3-4 days and Mushy’s 2-3 days (because he’s more active).

If you end up camping without AT&T signal coverage, expect Whistle to run out of battery in one day. It’ll desperately keep trying to reach a cell tower, and use maximum transmission power to do that. Just like on cell phones, poor signal drains the battery faster. If the Whistle runs out of power while without cell coverage and you do not have WiFi access, the app will keep displaying the last known battery percentage with no hint of how long ago that was still true.

However, what’s great is that the app will notify you when you have to charge the device. It completes a full charge in two hours with another notification to remind you to put it back on your pet’s collar once charged.  The devices also go in the charger very easily, and it’s much easier than trying to plug in a micro-USB cable. The chargers are powered via USB-A, which is very convenient for RVers. It’s an easy thing to do at night when you’re going to bed.

But even with this less-than-great battery life, Whistle 3 is still one of the longest-lasting GPS pet tracker products out there. It’s just a tough technical challenge to put a large battery in a small product. You can get better battery life from your Whistle by having a strong WiFi signal to stay connected even when your dog is lounging outside. Also make sure to have your WiFi access point always on.

As any traveling full-time RVer knows, you can’t rely on one cell provider to work everywhere.  We find that in the western U.S., Verizon usually works better than AT&T. So it’s a little disappointing that the Whistle needs an AT&T signal to work, but it’s definitely better than many alternatives. And, since the device is so small, there’s not much room for a great antenna there either.

Overall, the app is great and reliable, but, occasionally, Mushy will be right next to me and I’ll get a notification that says, “Mushy has left the RV park.” We know the reason why it’s happening (a smaller than recommended “safe zone” + our WiFi dropping from time to time) but it’s still a bit worrying as it makes me doubt the reliability.

Adjusting the “Safe Zones” in a multi-dog, multi-human setting is a hot mess. Only the person who originally created a safe place can edit it. Every time you create a new safe space, you have to go through a slow process where the Whistle scans for WiFi networks. That’s why we recommend that for your RV, you drag the old safe space to your new location. In a multi-dog family, if you set up the Whistles initially on different phones, you end up creating a separate safe space once per phone. But then you can’t in the future update those two independent spaces to your next campsite, because (after creation) they aren’t allowed to overlap.

Not that you could see the overlapping other safe space, while editing one — I sure hope your sticks and bricks neighbor doesn’t dog sit for you, because setting two safe spaces next to each other seems like it would be a nightmare. And you can’t just delete one of the duplicate safe spaces (from having two people set up two Whistles at the same time) because the app preaches to you about needing WiFi and doesn’t let you remove the only safe space (of that account) with WiFi. You can work around it, but I really don’t expect your average consumer to figure out how.

Other Considerations about the Whistle 3 GPS Pet Tracker

The Whistle 3 costs $100 (but is on sale for $64 as of this writing) and you have to pay a $7/month fee for the AT&T service plan, per dog.  You can think of the Whistle subscription as your dog’s cell phone plan — so I guess Mushy and Lily are officially teens who need their own phones.

RV dogs are always on the move and often exploring new, unfamiliar surroundings. Having a device like the Whistle has given us some peace of mind.  When we arrive to a new location, we go into the app and set the “safe zone” and should one of the dogs make a run for it, we would be able to press the “Track” button in the app and go find them.

We work from home and haven’t needed to board the dogs while we travel, so we don’t have first-hand experience with this. If we used a dog-walker or a boarding service, having Whistle notify us about how many walks the dogs are getting and confirming their location would be awesome.

GPS trackers are still a pretty new product category, and the non-everyday parts of the app — like adjusting safe places — could use more work. All in all though, we’re happy with the Whistle 3, and the dogs don’t seem to mind them at all.

So, do your pets have a GPS pet tracker device? Which one? How has your experience been? Let us know below in the comments!

Meet the Family
Ane and Tommi, F462447, of The Dog Is Driving love how RV life allows them to go on adventures. And they bring along their rescue dogs: Mushy and Lily Goodgirl. Full-timers since 2016, they share their experiences and review campsites through a pet-friendly lens on Instagram and TheDogisDriving.com.